“Things that we have heard and known, that our fathers have told us. We will not hide them from their children, but tell to the coming generation the glorious deeds of the Lord, and his might, and the wonders that he has done.” – Psalm 78:3-4 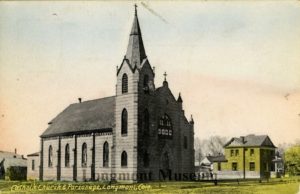 When Fr. J.W. Cummings was appointed pastor of the Catholic community in Longmont, Colorado, he envisioned a proper building in which to celebrate Mass. In 1881, plots of land at Third and Fourth Avenues and Collyer Street were donated as a site for a new church. On June 24, 1882, Bishop Joseph Machebeuf came from Denver to dedicate the new building, which was named for the saint of that particular feast day, John the Baptist. Through the ensuing years our parish has enjoyed a very rich and blessed history.

In 1888, the parish was given to the Benedictine Fathers by a decree from Rome. By 1900 it became increasingly evident that the little church on Collyer Street was not large enough for the growing Catholic population. Funds were secured for a new, larger stone church on the corner of Fourth Avenue and Collyer Street. The church was opened for services on March 13, 1906, and blessed by Bishop Nicholas Matz on July 2, 1906. In 1907, the sisters of St. Francis, originally from Milwaukee, Wisconsin, opened a school which was initially called St. Joseph’s Academy, the forerunner of our present parish school.

By 1960, Fr. Martin Arno, O.S.B., who was the pastor at that time, realized that the 55-year-old stone church was too small to take care of Longmont’s growing population. The old church building was razed and a new church was built on the site. It had a seating capacity of 760 parishioners and a full basement, which was available for additional activities. Archbishop Urban Vehr celebrated the first service in the new church which was Midnight Mass on Christmas Eve 1963. Today we worship in this same gathering space.

On September 26, 1971, St. John’s marked the end of a 73-year era of Benedictine Father’s leadership. Since then our parish has been staffed with priests from the Archdiocese of Denver.

Our parish continued to grow throughout the 1970s, 1980s, and 1990s so even more space was needed. An addition to the facility was completed in 1999 and provided a Eucharistic Adoration chapel, middle school classrooms, meeting rooms, a gathering hall, gift shop, and parish office space. Again, responding to our community’s needs, a “Share the Vision” campaign was launched in 2001 to update our 1926 school building and parish property. The plans included a new regulation-size gymnasium, new classrooms, energy-efficient windows, air conditioning, painting, updated lighting, carpeting, computer technology updates, new playground equipment, and landscaping. The $7.5 million debt incurred for all these improvements was paid in full by June 2010. We are now a debt free parish!

Throughout all these changes, St. John’s parish community has not only grown – it has thrived! From a simple mission parish in the 1880s, St. John’s has grown to over 3,500 families in 2015. Our current school enrollment is approximately 333 students in preschool through eighth grade. Our Food Bank serves over 200 families weekly and is staffed by mostly volunteers. We also support our sister parish in Uganda with food, monetary donations, prayers, and building supplies for their community. St. John’s parishioners consistently respond generously to every call for help from missionaries, ministries, and other outreach programs.

Our church buildings are frequently bustling with activity from early morning until late at night, as many parish ministries carry on Christ’s work of people serving people. Growth always brings challenges, but St. John’s has continued to be blessed. Over the past 128 years at St. John the Baptist Catholic Church, remarkable pastoral vision and leadership and an enthusiastic and generous, faith-filled community of parishioners, have created a joyful community of faith, hope, and love.